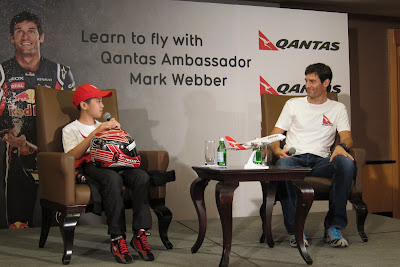 It’s every karter’s dream to be a F1 driver and it’s every karter’s wish to meet and greet a F1 driver! And it was a wish came true for Jon to be able to meet Red Bull Racing, Mark Webber on 22 September 2011. As a Qantas Ambassador, Mark was presented to a group of corporate guests and media in an exclusive closed door event at Ritz-Carlton, Millenia Singapore.


The flight took off with the 35-year-old Australian sharing his interest and passion in pursuing a flying license. Next, Jon as the 2010 Singapore Karting Championship (SKC) Cadet Champion, was invited on stage to be Mark’s “co-pilot”. He was given the great opportunity to interview Mark and below were the three questions:

1) Mark, you have been in Formula 1 since 2002, there were many changes to the car. Which year’s car do you like most?
2) Singapore GP is one of the street circuits in the F1 Calendar, how would you rate it among the rest?
3) If I want to pursue a career in motorsports starting from karting and aiming to reach F1,  which route would you advice him or her to take?
Mark replies to the last question which concerns Jon, “Well, it’s a long long road, you still need to finish school. Jon, how old are you now? (Jon answers, “I’m 12”). You have at least three to four years in go karts and then eventually you need to move to Europe and race in Europe. So, when you reach 17 or 18, you need to be in Europe, mum and dad will be crying at the airport. Then it starts from getting into single-seater racing in Europe. When you race over there, this is where you learn the most against the toughest competitors, drivers in the same age group, who are all very hungry and fearless and they want to get the results as well. And, of course, you have one of the things in your hands already, because, you speak very well and you are confident. And If you were to talk to people about trying to get some sponsorships and things like that, sharing your dream to maybe represent your country one day on the world’s stage. So, never give up! You got to be pushing hard cause you are going to face many many hurdles. Life is not a straight road, you have lots of challenges along the way and it is the people at the end of those challenges will be successful“.

Finally, Mark autographed Jon’s helmet and displayed it to the audience.

Jon acknowledges that it is not just racing, as studies are just equally important. It will not be an easy route towards fulfilling his dream. Lots of hard work awaiting him and support from various parties will be required to pursue his passion.

Thanks to Qantas for this memorable flight with Mark Webber! 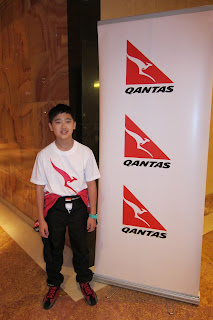 Catch Jon wearing the ‘new’ helmet at Round 5 of the Singapore Karting Championship on 19 – 20 November 2011, where he is currently leading the championship.

more pictures of the event can be viewed here…