Log In Sign Up
Asia Max Challenge (Round 2)
2-3 April 2016, Elite Speedway Malaysia
Due to school commitments, Jon has been missing the Asia Max Challenge (AMC) for more than six months. The AMC has a special place in Jon’s heart because that’s where he first started racing at the age of nine. So there was much relief and joy when the school agreed to allow Jon to take a day of absence on 1 April to participate in the AMC race.

Starting this year, most of the participants will be using the new EVO engine which Jon does not have. Fortunately, we managed to get it with the kind support of Uncle Peter, which allowed Jon to return to the AMC tracks again. It won’t be a walk in the park because he would have to deal with the challenges of racing in the DD2 category for the first time.
The Rotax Max Challenge website states that the “DD2 is open to karters who are 15 years old and above. The chainless drive concept is combined with a 2-speed gearbox operated by means of shift paddles directly from the steering wheel. Ideal for drivers aged 15 years and older* with know-how in kart racing, the engine is the closest to Formula car racing. Launched in 2002, the revolutionary engine gave rise to the development of chassis by all leading manufacturers. The DD2 is a completely different category with a more powerful engine and two gears. It is meant for those looking for the ultimate thrill and more challenges with the gears”.

Friday un-official free practise has four sessions for each category. Jon and his mechanic arrived at Elite Speedway, just in time to prepare the kart for the first session.

The day did not start as planned because the engine power valve was not working accordingly. Only in the second session was Jon able to put in some reasonable lap times. New tires were fitted to confirm the kart set-up in the third session but another issue caused his lap times to improve slightly only. It was found that the seat has cracked after the final session of the day. A new seat was fitted and re-positioned again before the team wrapped up the day.
More dramas unfolded on Saturday morning during official practice session 1. While Jon was going flat out down the high speed part of the track, just as he reached the turn, he braked but the right front brake was not working thus locking the left side, sending Jon towards the barrier. It was a heavy crash that completely mangled the stub axle, tie rods and steering column. Luckily Jon escaped with a sore right thumb only. After retrieving the kart, a few other mechanics joined in to help repair the kart, just in time for practice session 2. Jon tested the kart carefully but still complained that the brakes are not working properly. During lunch time before Qualifying, new brake pads were fitted and all the brakes fluids are also changed and bled. With no testing to confirm if the brakes are working properly, Jon took a cautious approach in the first few laps of Qualifying.In the end, he still managed to Qualify 11th among 24 drivers, not bad for a first timer. In Heat 1 and Heat 2, Jon was able to finish 6th and 7th respectively thus giving him a 5th position starting grid for Sunday’s Pre-Final. 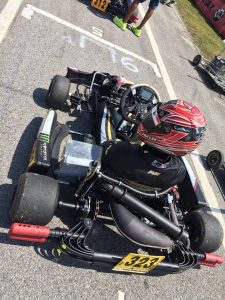 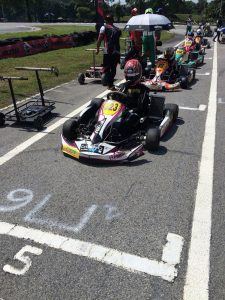 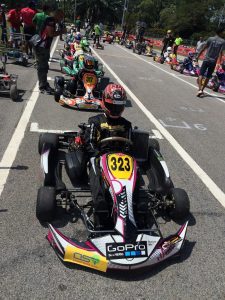 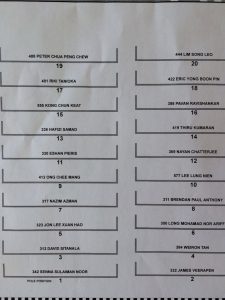 Looks like things are finally turning around after a disastrous morning. In the Pre-Final, Jon did not start well and dropped a few position but things are about to get worse. This time, the battery holder had gotten loose and it dropped sideways causing the wire harness to rub against the floor, shutting the engine down. Due to this DNF, Jon has to start from the last position in the Final.
Not to be discouraged, the team still target for a top ten finishing. It was almost a perfect start as Jon was able to jump eight drivers after just two turns. Bad luck strikes again as Jon was heading towards the high speed downhill section. He was taking a tight line to protect his position but the track was bumpy and the kart swerved left hitting another kart causing Jon to spin 180 degree and stalled. By the time he was able to get the kart racing again, the whole pack was already three quarter of the track away. After 20 laps, Jon completed the race at 20th position.
Nevertheless, the organizer still award Jon with a consolation trophy.
With a two-week break, Jon will be back in KF1 for round 2 of X30 Challenge on 16 April.